“Stráinséars” in Árainn in 1931
It is always interesting to compare accounts of travellers to the Aran Islands, before and after the release of Robert Flaherty’s film Man of Aran in 1934.
The danger of the narrative chosen by Flaherty, becoming accepted as the quintessential Aran experience, is strong. For this reason, accounts pre Man of Aran, provide a valuable insight into those times.
The year 1931 saw a number of travel writers and artists visiting the islands. The visit of the famous travel writing partners of Jan and Cora Gordon coincided by chance, with the visit of the Bohemian artist couple, Ethelbert White (1891-1972) and his wife Elizabeth Dodwell.
These two highly unconventional couples, must have added a lot to Island life that year. Jan and Cora Gordon were well known artists, musicians and writers and this article started out as a feature on the travel book they wrote, Three lands on Three Wheels (1932) which included a long piece on their Aran visit. 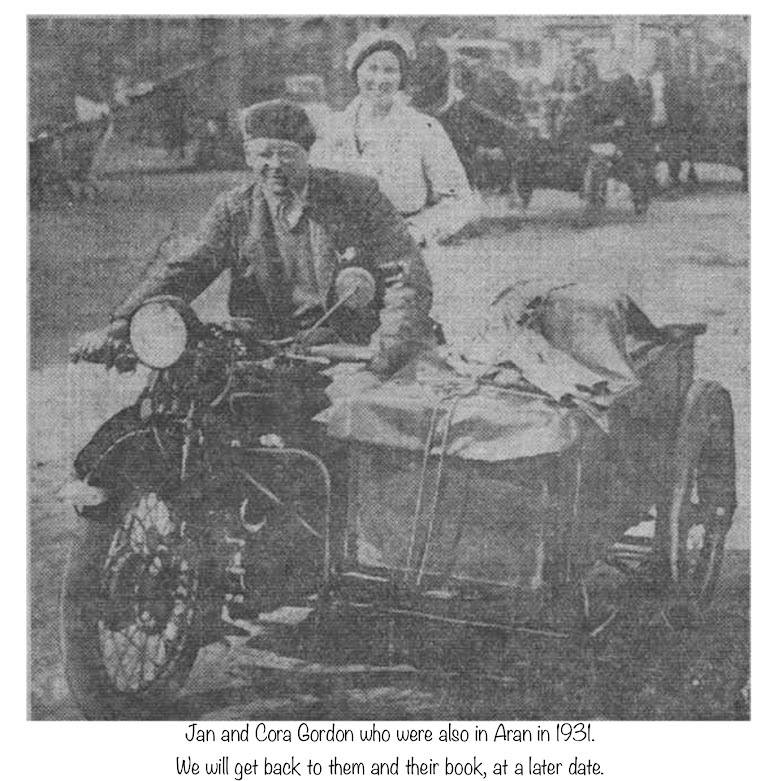 However, in researching the Gordon book, we came across Bertie and Betty White and the piece on Jan and Cora’s book will have to wait. While the Gordon’s based themselves in McDonagh’s Guest House in Cill Muirbhigh, the Whites stayed at Ganly’s thatched hotel in Cill Rónáin. 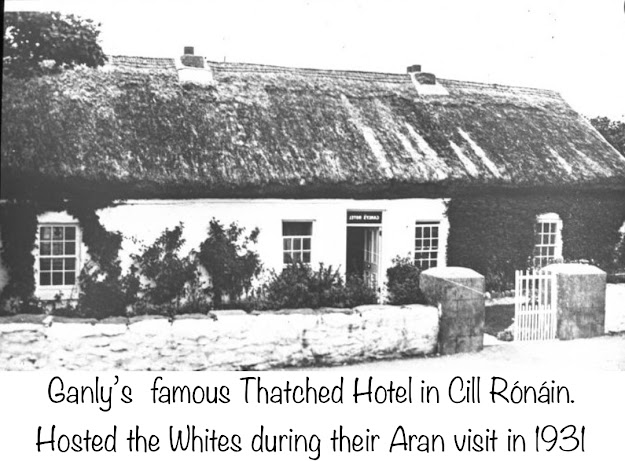 Ganly’s was also the base in 1931 for the English endurance swimmer, Mercedes Gleitze and her husband, Patrick Carey from Dublin, when she attempted to swim from the Aran islands to Salthill. After 19 hours in the water, she eventually came ashore at Chois Fharraige. Fr Egan had objected strongly to her swimming on a Sunday, as she and those accompanying her, would miss mass.
The decision to enter the water at Ceann Gainimh at Inis Meáin, rather than at Bárr a Phointe near Cill Rónáin, was later blamed for Mercedes missing the tide, which might have brought her to Salthill, where a huge crowd awaited. But then, hindsight has 20/20 vision they say.
She was accompanied by the Galway pilot boat “Nab” which was owned by Senan Meskel and skippered by James Tierney. A large crowd saw them off at Cill Rónáin pier, about an hour before midnight, as they headed for the middle island.
At Inis Meáin, a large crowd of islanders had gathered to welcome her ashore and see her off again on her journey. Shortly after midnight on August 2nd, they cheered again as she struck out for the mainland.
That was in August 1931 with the Gordons and Whites arriving separately, some weeks later.
January 1931 had also seen the publication by the artist Charles S Higgins of his book, There are Stones, under the pseudonym, Ian Dall. This book dealt mainly with his time on the middle island, Inis Meáin.
But back to the main subject of this article, Ethelbert and Elizabeth White. Those who think that alternative style living started with the “Hippies” of the 1960s, are greatly mistaken.
This was not Bertie and Betty’s first visit to Aran and there must be many paintings of Aran scenes, which are yet to be found. We did manage to come across two low quality images of Árainn long ago.
Ethelbert White is regarded as one of the great English landscape painters of his time and is equally well known for his wood engraving, a skill he shared with another English artist with Aran connections, Elizabeth Rivers of Man of Aran cottage fame. We featured Betty Rivers in a previous article about the burying of a drowned English Airman in 1941. https://www.aboutaran.com/2017/09/the-loney-grave-of-alfred-tizzard.html
Bertie and Betty White had married in 1911 at the age of twenty and their time in Árainn would mark their twenty years anniversary. Apart from their work, what really interested the British public was their unconventional, bohemian lifestyle. Bertie had independent means and he and Betty were able to indulge in travel and adventure before becoming famous and collectible.
At the time of their Árainn visit they had a cottage at Hampstead near London but every year when the Spring arrived, they would take to the road with their caravan and stay mobile until the winter approached. In later years they settled in Devon and painted many scenes from that lovely part of the world.

Both Bertie and Betty were gifted musicians and would entertain the crowds as they rambled the English countryside, painting as they went. It was reported that the handsome Bertie would play the guitar and sing while dressed in corduroy trousers and Betty loved to dance in a gypsy outfit.
A newspaper report of their Aran visit recalled a great night of music and song in Ganly’s, where Bertie entertained a group of locals with traditional ballads he had picked up in Majorca. Taking this as a challenge, the locals responded with a few powerful songs in Irish and the entertainment went on until the early hours.
A number of reports mistakenly identify Bertie as being Irish but this was possibly down to Betty’s ability to dance an Irish jig with unbridled enthusiasm. Although Bertie was an English gentleman we suspect that Elizabeth Crofton-Dodwell had Irish connections.
They also travelled in France and Spain and recorded life in those parts of Europe, before the bloody Civil war in Spain and the bloodbath and horrors of WW2. The high energy level of the Whites was credited by some, to them both being vegetarians and teetotallers. 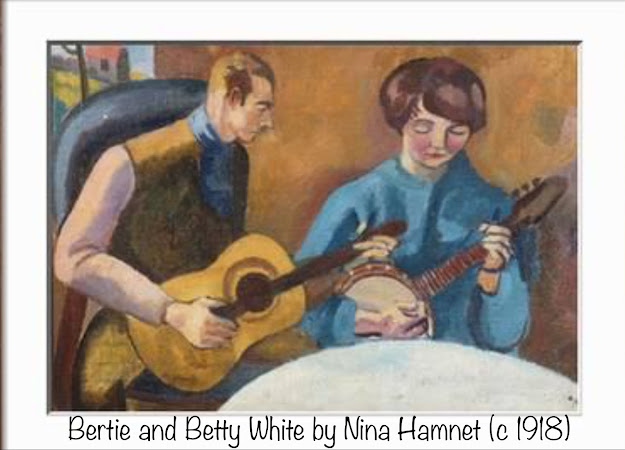 Not surprisingly, they were vehemently anti fascist, when many in  high society 1930s Britain and Ireland, had a grudging admiration for Franco, Mussolini and Hitler.
The Whites were often mentioned in the society gossip columns and a thinly disguised disapproval of them and their lifestyle, is evident.
A couple who travelled around in a Gypsy caravan and with the husband painting his lovely wife with no clothes on, was bound to draw gossip.
An example of the type of backhanded compliment can be seen in this 1930s report of a high society event. “As I was leaving, I saw Mr and Mrs Ethelbert White rush off into the darkness with the free gait of those who wear sandals and are not compressed by shoes, no matter how comfortable.”
We can assume that the Whites did not bring their Gypsy wagon to Aran or indeed Ireland but the Gordon’s however, did indeed bring their mode of transport with them to Cill Muirbhigh. This was a motorbike with a sidecar and which was known in those times as a “wife killer”. A fearsome and noisy machine that must have brought many mallachtaí from the local horsemen.
Surely a first for the roads of the Aran Islands.
We will get back to the Gordons and their travel book, at another time.

Another visitor to Aran in the summer of 1931 was a young English travel writer from Dorset, Nora Laverock Lees and her book about her visit to Árainn and Connemara, Bogs and Blarney, is very enjoyable. 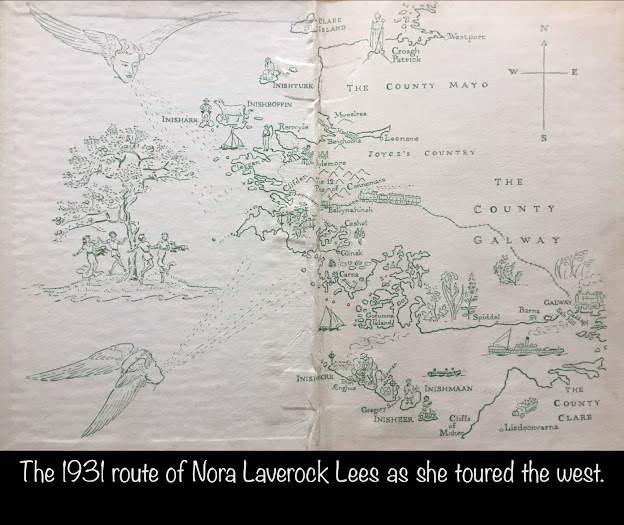 Travelling alone, Nora had great insight and recognised immediately the great honour of being invited to sit by the kitchen fire with a mug of tea rather than be ushered into the chilly “good room” for tea out of a china cup. We hope to do a piece on Nora’s time on all three islands, at a later date.