Shipwreck on Árainn in January1835.

In Ireland it was often said that a man could 'mind mice at a crossroads'. This wasn't a compliment.

The old saying came to mind recently when reading of the impossible job the local Chief Officer of the Coast Guard, Edward Neville D'Alton (1794-1871) had in 1835 as he tried to protect a huge cargo of timber from being salvaged by islanders and by boats from Connemara.

On January 17th of 1835, islanders noticed a demasted ship drifting towards the island from the south west. It was observed from the cliffs between Cill Muirbhigh and Bungabhla and when word reached Chief Officer D'Alton, he launched his boat from Cill Rónáin and headed out through Sunda Ghrióra.

In a letter to his commanding officer, Captain White, D’Alton gives a great account of the whole incident, ending with a plea for more ammunition as he had used up most of what he had while firing at the raiding Connemara Hookers, which he described always as North shore boats, as they helped themselves to the floating timber.

Shortly after exiting the Gregory Sound, the wind increased and eventually he came across the abandoned ship, west of Dún Aengus, with its stern grinding against the foot of a 300 foot cliff. He observed a number of islanders high on the cliffs as they looked down on what the ocean had delivered.

The ship was about 300 tons and most of her sails had been blown away. Her spars were still standing except for the jib-boom and the mizen-top mast. It was waterlogged and some of its cargo of timber was floating nearby. He reported that the ship had eleven painted portholes on each side. He was unable to board as the light was fading and the backwash from the cliffs, made it too dangerous to approach.

There was no sign of life and no sign of small boats on the deck. It appeared to have been abandoned for some time but as the weather was deteriorating, he decided to make for Bungabhla and attempt to make a landing. 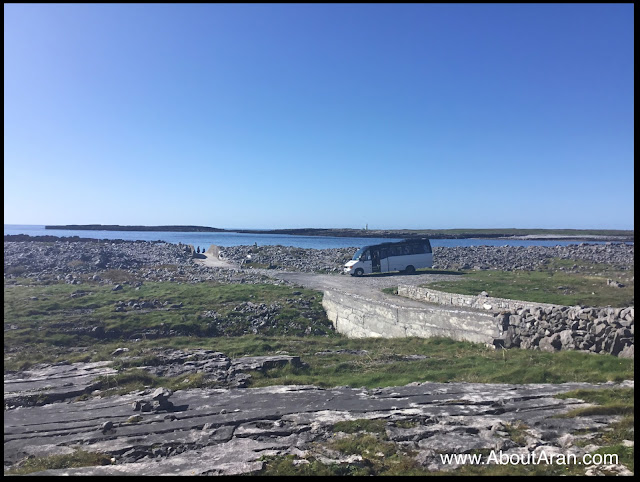 He reported that as he entered Brannock Sound, he spotted Mr O’Flaherty pointing out a safe place to land and with the help of locals, he and his crew managed to get ashore and get their boat secured. The use of the name O’Flaherty rather than Flaherty and the prefix of 'Mr' would suggest that this was the Middleman/Landlord, Patrick O’Flaherty of Kilmurvey House. He was then aged about fifty four. 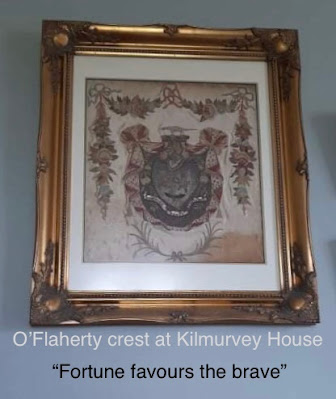 Patrick was by far the largest landholder on the three islands and the most important tenant of Rev John Digby of Kildare, who owned the three islands. In May 1831, Patrick had been made a Justice of the Peace by the Lord Chancellor and it was in this capacity that he would shortly send five men to prison in Galway for salvaging timber from the wreck.

The story takes a very strange turn at this stage with an unusual account from an islander who had managed to get aboard the wreck before the Coast Guard arrived.

D’Alton discovered that a man from Bungabhla by the name of Daniel Flaherty had boarded the wreck, possibly before it reached the cliffs and managed to take off some rope and other wares. He had some books and letters along with two sea chests. He also had some clothes and a small quantity of rum.

It’s unlikely that Daniel had willingly volunteered all this information and salvage as he would have been well aware that items like this were to be collected by the Coast Guard on behalf of the crown. He may well have been apprehended by the Justice and his men and was co-operating with a view to leniency.

And here is where the story gets a little bizarre. Daniel’s tale of what he found on boarding is so strange that one can’t but be suspicious that he may have been trying to deflect from his alleged crimes by getting the Magistrate and Coast Guard officer distracted.

The ability to come up with a good story has a long history on the islands and the skill still survives today. On his 1912 visit to Aran, the writer James Joyce met an old man named O’Flaherty. A man like James, making notes in a big notebook, should not be disappointed and the old man pointed out a nearby bush to James Joyce. 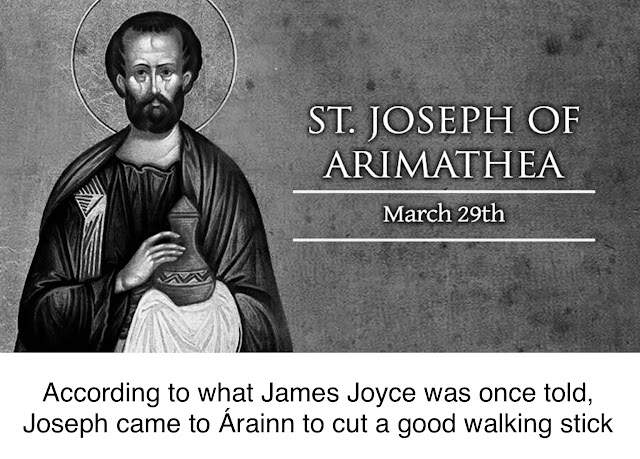 But back to Dan’s story. On climbing aboard the ship, he reported finding a dead pig, with hair on it, lashed to the rigging in a putrid state, a compass placed between its legs, a few bottles of water, some biscuit and a little rum. He also reported that the ship had no rudder.

After a SE storm that night, it appears the wreck shifted and next day was found smashed on Oileán Dá Bhranóg (Brannock Island). In 1835 there was no lighthouse on the tiny island of Eeragh which lies west of Brannock.

Word of the wreck having reached Connemara, a vast flotilla of Hookers arrived and the Coast Guard had an impossible job in trying to protect the King’s timber. As soon as he chased off one boat, the others were in like a flash and gathered what they could.

Only for the forty year old D’alton and his Coast Guard crew being well-armed, they would probably have been overwhelmed by the plundering boatmen. When it came to trying to catch a Connemara Hooker, they had little chance as the bádóirí had vastly more sailing experience and also an incentive to avoid jail.

In those times it was not unusual for recovered timber and cargo to be sold off at auction. This was done in 1825 when, along with the Coast Guard offering for sale, was some timber salvaged by middleman Patrick O'Flaherty and others.

One good news story from those times concerns three men from Rosmuc who were swept away in a storm in March 1835. They were attempting to tow a large spar to Connemara which probably came from the Arran shipwreck. After three days and two nights, they finally made land in the Shannon Estuary. According to the reports, they sold their boat and spent a few days recovering. When their money was spent, they headed for home to the great joy of their families who had given them up for dead. Some of their friends hadn't by then, fully recovered from their wake.

Chief Officer D’Alton also reported that a child’s frock and glove had been recovered. There was speculation that the ship was out of Belfast as a piece of the stern had been found with the letters 'BEL' still visible.
Patrick O’Flaherty JP had his own boat which would be lost in August 1840 with all seven people aboard being drowned. The Red Gauntlet had been on a passage from Casla bay to Cill Rónáin when it overturned in a sudden squall just off Bárr a Phointe.

The winter of 1835 appears to have been a hard one around Galway Bay. On January 19th, a boat with a cargo of salt for Galway was wrecked at Ceann Boirne but luckily, the crew were saved by Captain Kemp from the Ballyvaughan Coast Guard station.

In January also, a Claddagh fishing boat belonging to Widow Hernon was wrecked, probably at Carraig an Mhatail (Carrickawathal) rock off Inverin, as it rushed back to Galway with a boatload of fresh herring. After being widowed by fever, the woman had made heroic efforts to get a boat built and it had only been launched a few days previously. On board was her young son Stephen, a man named O'Neill, Pat Moran and John Connolly.

The cries of the four drowning men could be heard by the men in nearby boats and locals on shore, but they were unable to save them. When the boats eventually reached Claddagh, the widow and her daughter were waiting on the pier. It was reported that the fishermen turned their backs and found any excuse not to have to be the one to break the terrible news.

Eventually, the woman and her daughter realised what had happened and the  silence of a fishing village in mourning was disturbed by the anguished lamenting of the widow as she grieved the loss of her son and relatives and the prospect of almost certain destitution.

Newspapers carried a report in April 1835 of a ship, the Sarah Margaret, going aground northwest of Aran and the passengers being landed on one of the islands. The location is almost certainly inaccurate as the boat appears to have been grounded on the Finnis Fock which 125 years later would claim the world famous Father Ted wreck, the 'Plassey'.

It’s almost certain that it was at Inis Oirr that the twenty passengers bound for Quebec were landed. Also, much praise was given later to Francis McNamara of Arran View in Clare for his help in protecting the ship. It was later refloated and, with the help of currachs, brought to Balkaghaline Bay near Doolin. Tim Robinson was fairly sure that Francis McNamara was married to Patrick O’Flaherty’s sister, Marcella.

In May 1835 another abandoned ship was found near Doolin and the Coast Guard managed to salvage her. She was about 600 tons and had a valuable cargo of North American Timber.

The legal position as to shipwreck rights on the Isles of Arran would be fought out at the Four Courts in Dublin in 1862. Then, it was decided that ancient laws conferred the rights to the owners of the Islands, Miss Digby and Mr Barfoot. This had been contested by Fr Peter Daly on behalf of the town commissioners of Galway.

Edward D’alton was busy again just a week or so after the shipwreck on Brannock, when the brig Woodbine of Scarborough, with a cargo of oats from Galway and bound for London, was driven ashore at Inis Meáin. He was credited with taking the situation in hand and successfully protecting the cargo and crew. The master, Captain Maw, credited D’alton for saving his life, after he was confronted by looters.

We have been unable to find out what became of the passengers and crew of the Brannock Island wreck but we have come across many instances of crews being rescued in mid-Atlantic by vessels who happened to spot them - the abandoned ships often making landfall in Ireland.

On December 15th, 1834 the British sailing ship 'Fitzroy' of Newcastle, was abandoned off the Grand Banks of Newfoundland, her crew having been rescued by a passing ship, the 'Caroline'. The Fitzroy and its timber cargo, eventually washed up in Dunmanus bay in Cork on March 7th, 1835. In view of the child’s frock found at Oileán Dá Bhranóg, we can only hope that this type of rescue was also the case in our story.

So next time you see an ancient photo of a Connemara or Aran cottage, there is a very good chance that the timbers holding up the roof were rescued from the tide. The rescuing of which caused men and women to risk, and sometimes lose, their lives.

P.S. Some readers may remember Oileán Dá Bhranóg featuring in a previous post about two men being marooned there in 1926 and the death of a World War One veteran who was involved in their rescue.

You can read that story  HERE