While doing a bit of research, we came across the story of how three Islanders were lost in November 1891. At first we suspected that as the location given was in the west, the victims were most likely from that part of the island.

Further research revealed that the heroic friend to 19th century Irish fishermen, Thomas Francis Brady (later Sir Thomas), inspector of fisheries, had organised a fund for the 15 people left destitute as a result of the drownings. Also involved in the disaster fund was the local priest, Michael O’Donohoe, who was to die young and is commemorated by the magnificent Celtic cross in Cill Rónáin.

We tried and failed to get names for the drowned men, as amazingly, while the newspapers reported all the names of the many many people who donated to the fund, there was no mention of who the men were. We did however discover that they came from the main fishing village on the island, Cill Éinne.


How quickly we have gone from having so many of the older generation to ask questions of, to having almost nobody.

Luckily, one of Cill Éinne’s best known fishermen and historians, Micheál Seoighe, remembered hearing of the disaster and had heard they were all of the Dirrane clan. He had also heard from his late father, Martin Fest, of how the disaster had unfolded.

We then managed to identify who the men were and at last, give them their names. Three of the countless Aran fishermen, who were drowned through the ages.

As dawn was breaking, on the morning of Wednesday,November 4th 1891, a group of cliff fishermen were about to try their luck at An Pointe Fiáin (Wild point) at the south side of the big island, Árainn. This area of cliff lies about two miles west of Dún Dúcathar and opposite Baile na Creige. 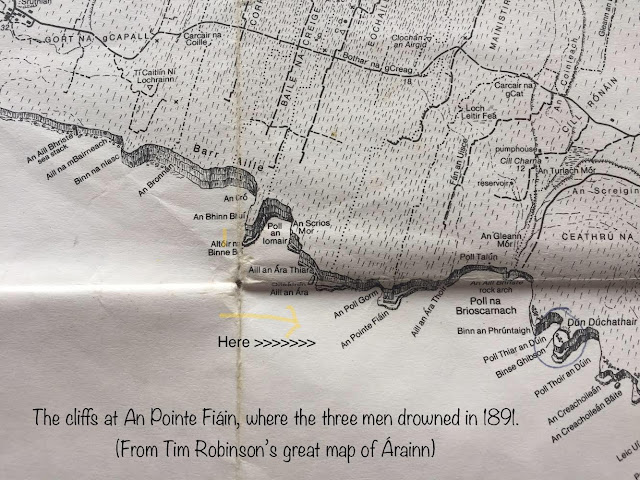 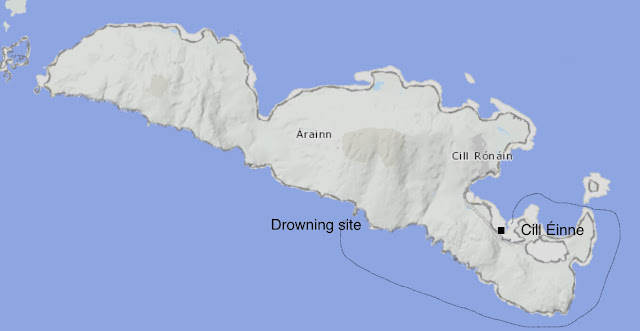 As they looked over the edge, it became immediately apparent that a great tragedy was about to unfold. There beneath them was a currach, drifting towards the rocks, with three men aboard who were apparently asleep.

The shouts of warning from the men and boys on the cliff did eventually rouse the three men but alas, it was too late and the lightly constructed currach, St Patrick, foundered and capsized. 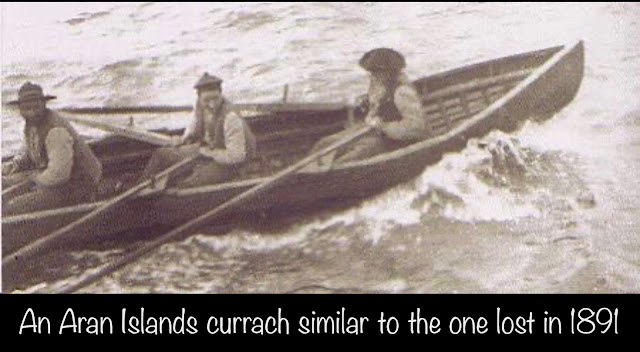 In fine weather a currach might overnight at sea and it’s likely that exhaustion and hunger were the reasons these men were unaware of their situation, until it was too late.

They had been fishing with trammel nets and must have been waiting to haul. It was said the men on the shore heard the man in the bow declare, as he realised his terrible situation, “nach bocht an bealach é, le n-imeacht”. (isn’t it a poor way to go)

The three men who died were,
John Dirrane (John), aged 38 and married with five children. He left a wife Bridget and their children ranged in age from nine years to six months.

His brother Michael Dirrane (John), aged 36, married to Catherine and they had three children. His widowed mother in law was also dependant on him. The two women widowed that morning, were sisters and the daughters of Peadar Sheáin Dirrane and Anne Folan..

We suspect the last man drowned, Patrick Dirrane (Michael), aged 22 and single, was a close relation but can’t say for sure. He left a dependant widowed mother, a sister and a dependant five year old  orphaned nephew. Patrick’s mother was Honor Kennedy, a surname that has died out in Cill Éinne.


Wasting no time, on the very day that the men were drowned, the local medical officer, Doctor Thomas Kean had written to the Irish Times seeking assistance. He had visited the families and found them in great distress.

Dr Keane had succeeded Dr Bodkin in 1890 and would himself die in 1901, having caught typhus in 1900.
Not unlike the drowned fishermen’s wives, Dr Kean’s widow Bridget Ruane, would be left with seven small children between the ages of nine years and six months. 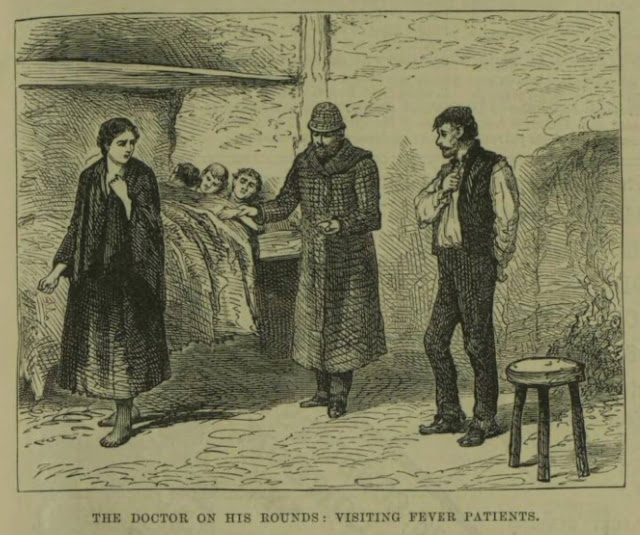 The five year old orphaned nephew had a serious hip complaint and Dr Kean appealed for blankets and funds. These clothes and blankets were not long in arriving as people responded with great generosity. Medical help for the crippled child was also requested.

The list of contributors to Brady’s fund is extensive and included many Catholic and Protestant clergymen, many of the aristocracy but many also who were just ordinary people who contributed what they could, down to the small sum of a shilling. Among the better known contributors were Michael Davitt and Lady Gregory.

Davitt would have been well aware of the abject destitution in Cill Éinne, when fishing was bad. He had visited the island in 1888, in the company of an American journalist. A visit we covered a while back and which makes for harrowing reading. HERE

Brady sent numerous letters to the papers and this was not the first time he had organised funds for drowned Aran fishermen and sadly, it would not be the last.

Just days before the Aran drownings, Brady had started a fund for the dependants of two Cork fishermen, lost off Kinsale. He was pushing strongly for a marine insurance scheme, to protect the families of the many drowned seafarers. 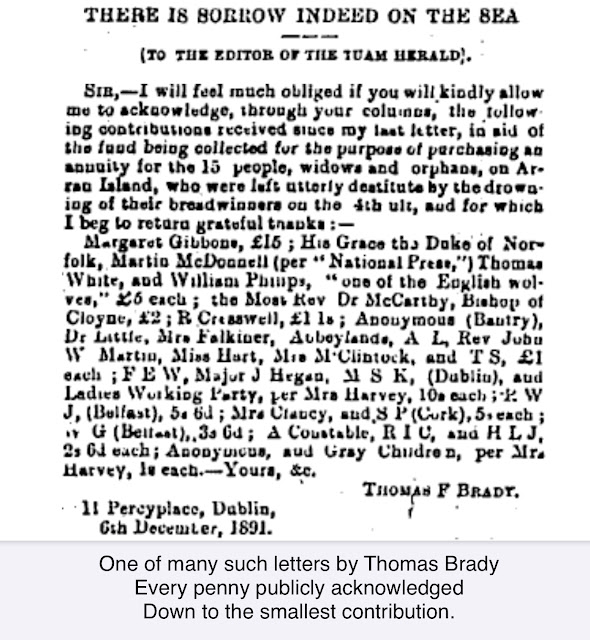 An unusual, but undoubtedly very welcome donation, was one from  the famous pork business, Shaws of Cork, of salted bacon and pigs heads.
And a promise from another Cork bacon company, Lunham Brothers, to repeat the donation in the future.

By publicising the offer of future help, Brady was making sure it would not be forgotten about. 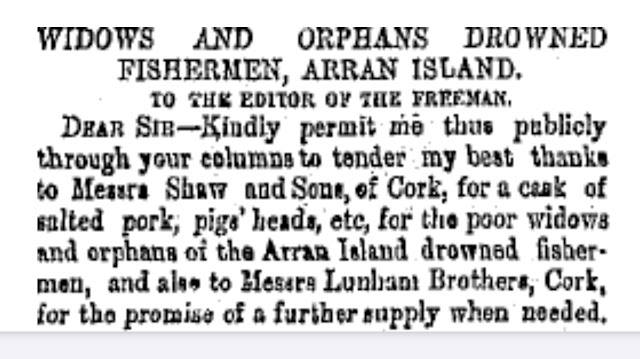 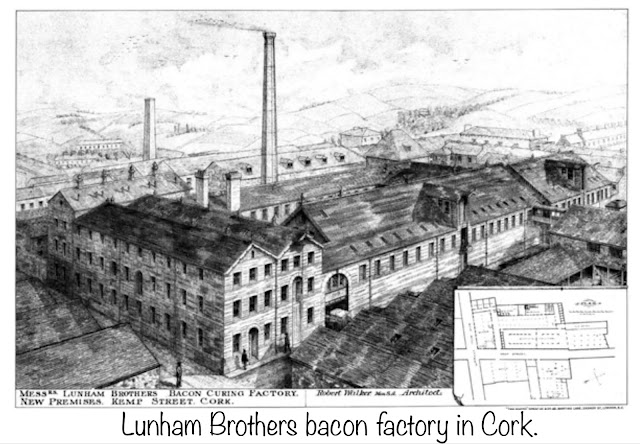 At the time of the drownings, the Congested Districts Board efforts to stimulate the fishing industry in Arran, were well under way. A regular thrice weekly subsidised steamer connection with Galway had started on the 1st of February 1891 and just four months later in March 1892, the first telegraph connection would be made.

In a letter to the newspapers, Fr O’Dononoe had noted that thirty years previously there had been sixty registered boats in Cill Éinne bay, employing 260 boys and men. Now, there was not one registered boat and the locals were confined to the flimsy currach. In the ten years he had been on the island, twenty two men had been lost from currachs.


The number of drownings around the three islands, Connemara, Claddagh, West Clare and Galway Bay is extensive and the last night of 1899 would see three men drowned in Cill Éinne bay when a massive storm hit, wrecking many boats as they lay at anchor.

Not far from where the three Cill Éinne men were drowned in 1891, another three fishermen from the village were lost in October 1947. They were father and son Thomás and Michael Joyce and their neighbour Stephen Conneely.

John Powell of Baile na Creige was commended on that occasion, for ascending over 300ft when he successfully recovered the three bodies.

What drew our attention to the 1891 drownings was the absence of any mention of the names of the three men. Drowning was no stranger to Cill Éinne and the writer and actor Pat Mullen once noted that at the turn of the 20th century, there were over twenty women in Cill Éinne who had lost their husbands to the sea.


There must be many descendants around of the nine children who were left without a father that morning. It’s likely that the story of the drownings has been passed down through the generations.


We wish to thank Micheál Seoighe, without whose help we would never have been able to put this sad story together.