Doctor O’Brien and his powerful memory.

While reading the very informative book Nobody’s Business, The Aran Diaries of Ernie O’Malley, we were interested greatly in his interactions with the island doctor James O’Brien (1883-1970), who served the three islands for over forty years. 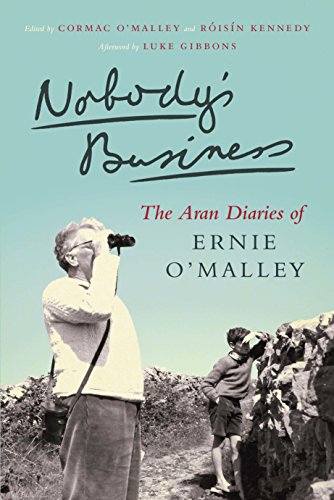 Ernie was a very famous rebel who had a great way with words and his unguarded diary entries, on the Ireland of the first half of the 20th century, are very insightful. The book is edited by his son Cormac O’Malley and Róisín Kennedy.

Ernie’s casual account of his visits to the islands in the 40s and 50s, brings readers back to a world long gone. He was particularly friendly with Cill Rónáin man, Dr Séamus O’Brien, who was the son of John O’Brien and Margaret Hernon. His parents ran a pub and shop which some readers will remember as the late John Kenny’s ‘Lucky Star Bar’. 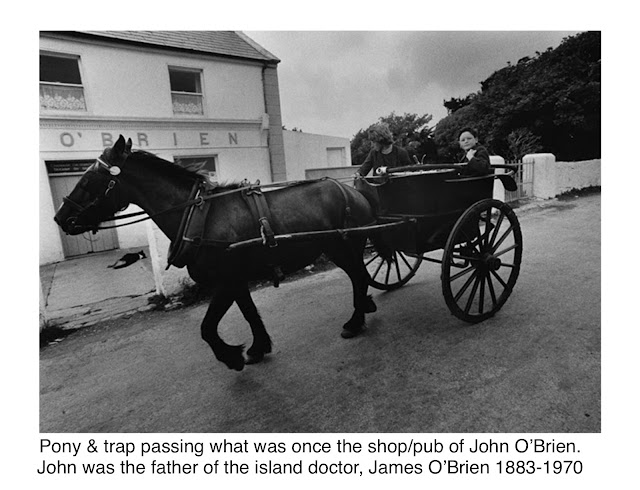 In the course of the book, it was recorded by Dr O’Brien that the very famous English painter William Holman Hunt (1827-1910) had stayed in O’Briens once and that as far as Dr O’Brien could remember, he had once come across a painting by Hunt, of the head of an Aran boy, in some museum in Liverpool.

Ernie was married to and had three children with, the very talented American artist, Helen Hooker O’Malley.

Dr James O’Brien is remembered as a brilliant doctor, if a little eccentric, and he had a great interest in the arts. We can remember the late Brendán Ó hEithir mentioning how kind Dr O’Brien was when Brendán was a boy, in letting him borrow books from his extensive library. 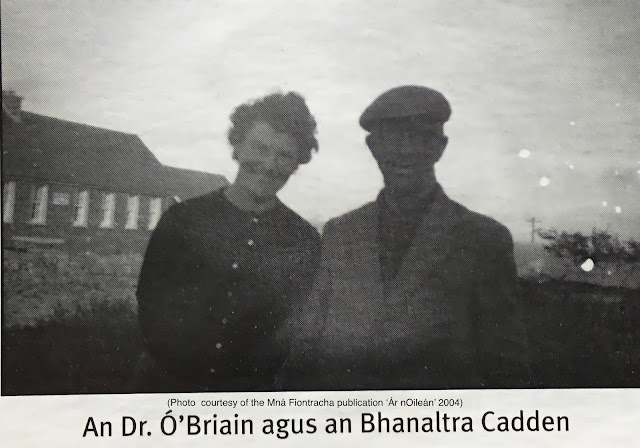 Ernie O’Malley had among his companions on Árainn the very famous Irish Painter, Charles Lamb (1893-1964) and he mentions how Charles’ wife was somehow related to some of the old Pre-Raphaelite crowd. 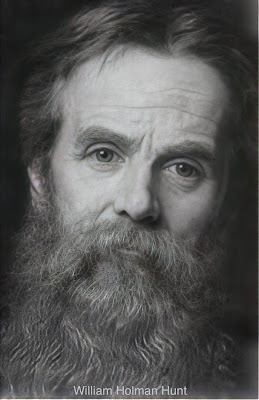 William Holman Hunt was one of the seven original members of a school of painting known as the Pre-Raphaelites founded around 1848.

The reference to Lamb’s wife being connected to this group is correct. Charles Lamb was married to the American, Katherine Madox Hueffer (1900-1978), who was a daughter of the famous English writer, Ford Madox Ford whose maternal grandfather was the Pre-Raphaelite painter, Ford Madox Brown.

It seems no record of William Hunt ever having visited Árainn could be found and the possibility of Dr O’Brien being mistaken, had to be considered as he was very young at the time of Hunt’s alleged visit.

It was only when we were doing some research on the efforts in the 1890s by Fr Michael O’Donahoe, (of Cill Rónáin cross fame) to raise funds for new boats, that we came across a reference to William Hunt.

One of the stated aims of the Pre-Raphaelite Brotherhood was to…….STUDY NATURE ATTENTIVELY, SO AS TO KNOW HOW TO EXPRESS IT.

It’s no great surprise then, to discover that Hunt spent a month on the island in the company of a very famous Cambridge zoologist, Harold Hulme Brindley (1865-1944). Harold was following in the footsteps of another great Cambridge man, the botanist Cardale Babington, who had attended the great Dún Aengus Banquet in1857. 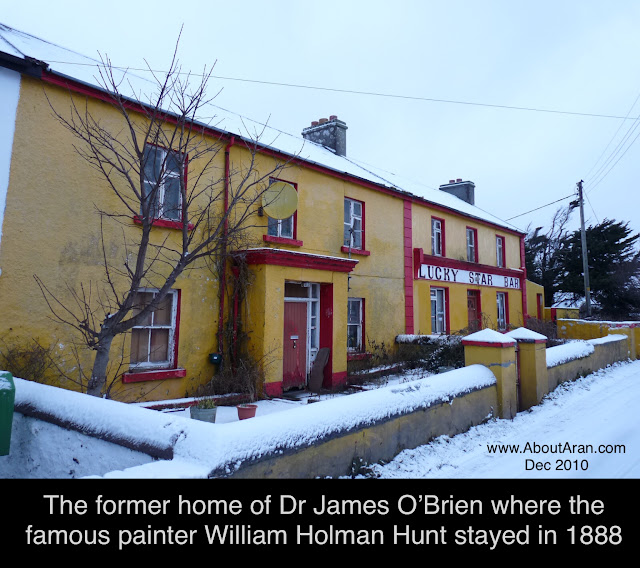 In a letter to the papers in February 1892, Harold Brindley mentions the great friendship he and William Holman Hunt established with Fr Michael O’Donohoe during their time on the island in the summer of 1888. A hungry year which we dealt with before when documenting the visit of Michael Davitt and his efforts at Relief. Harold donated a pound towards the fishing fund. Dr O’Brien would have been just five years old when Brindley and Hunt stayed in his home.

William Holman Hunt is famous in Protestant religious life for his two iconic paintings, Light of the World and The Shadow of  Death.
His ‘Light Of The World’ was often reproduced in stained glass, in Anglican Church windows. 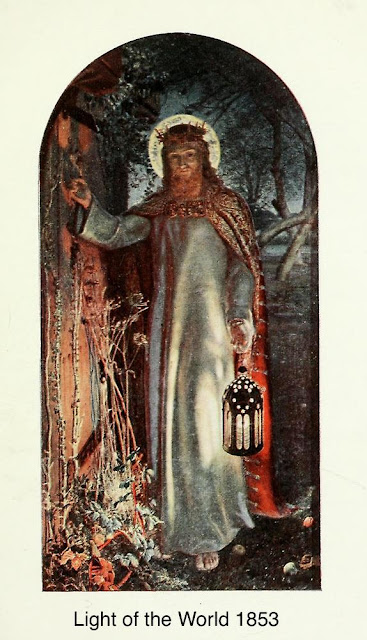 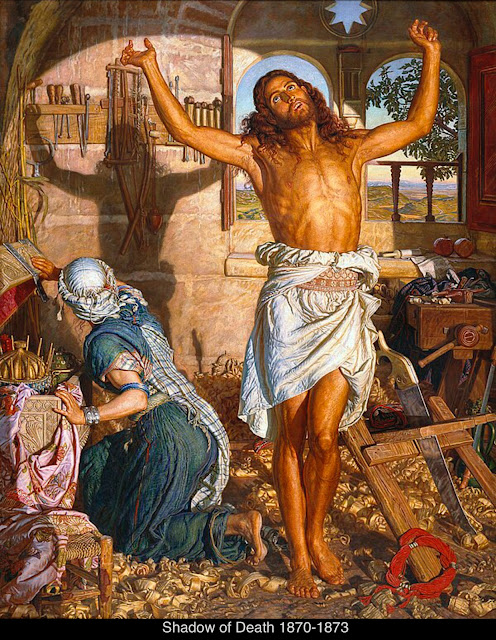 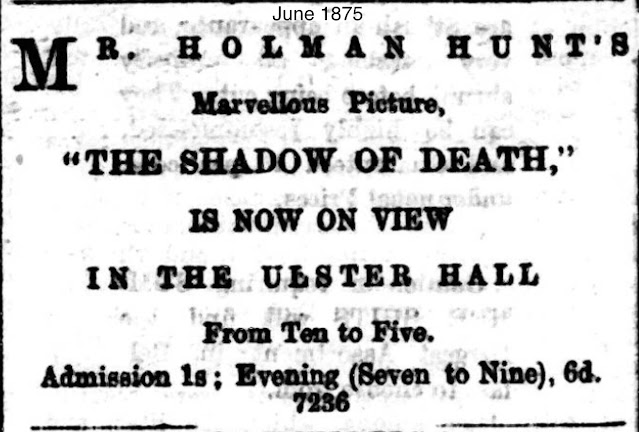 Shadow of Death exhibited to huge crowds in Belfast and Dublin in 1875. Holman Hunt’s third and final version is now in the Art Institute of Chicago

William Hunt is famous also for some non religious paintings. Here are examples of two, which feature a mistress getting up from the lap of her wealthy lover and a rosy cheeked shepherd attempting to seduce a young shepherdess. 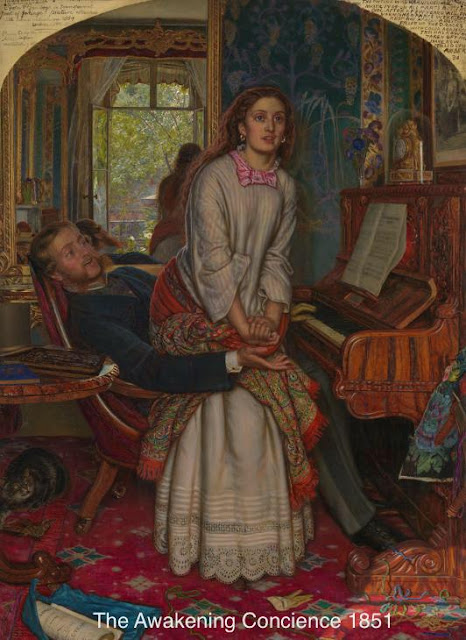 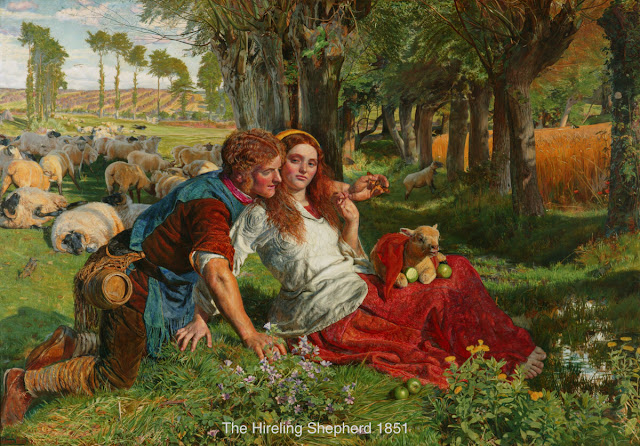 This entire article is an example of how going down one road can soon see one heading off down inviting boreens and the main story of the financing of boats in 1892, must be left for another day.
We almost started detailing some of the great paintings of the Connemara based Portadown man, Charles Lamb, but that would take forever.
Indeed it might lead on to us mentioning one of the great heroes of Irish nature studies of our youth, Charles Lamb’s son-in-law, the late  Éamon de Buitléar and his 60s TV programme ‘Amuigh Faoin Spéir’
Or even a mention of Fr Ted’s Craggy Island and Fargo Boyle  of the champion sheep competition. Fargo was played by one of Ireland’s most distinguished stage, film and TV actors, the late Peadar Lamb (1930-2017), a son of Charles.
(Time to stop.)
M Muldoon January 2022