Tourists boards pay writers to come up with fine words regarding tourist destinations but in 1919, a review of a holiday spent on the Aran Islands could not be bettered. That the reviewer was a politician, barrister and journalist, was of great benefit and that he had a reputation for being scrupulously honest and fearless, lent extra credibility to his remarks. 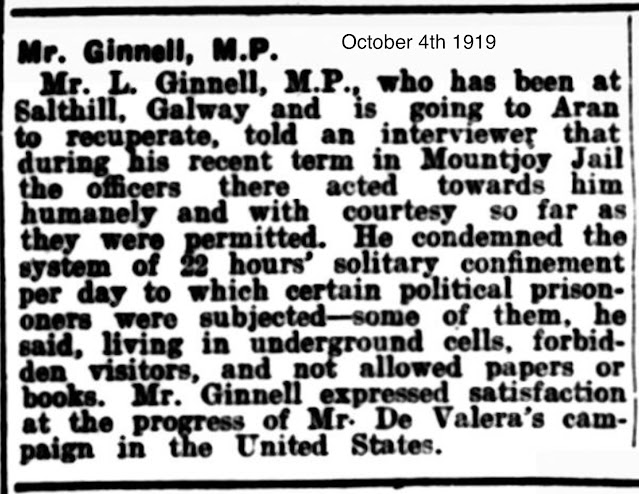 In October 1919, a very important but sadly neglected figure from Irish history, Laurence Ginnell (1852-1923), spent some time recuperating in Árainn after a difficult few months in jail. He was  sixty eight years old and in poor shape but he credited his stay at Ganly’s Hotel in Cill Rónáin with restoring much of his vigour.

Ginnell was the serving MP for Westmeath since 1906 and had been prevented from attending the first  Dáil (1919-1921) in 1919 by virtue of his imprisonment. He had a lifelong reputation for being “difficult” but this word was and is, often used for somebody who doggedly sticks to principal and refuses to make compromises.

His interventions in Westminster were legendary and he was a man to be wary of no matter what side of the political divide you came from. He had been expelled from the Irish Party in 1909 for asking awkward questions about finances and receipts. This was very similar to how Anna Parnell had been sidelined for doing the same to her brother’s Land League, some years previously. 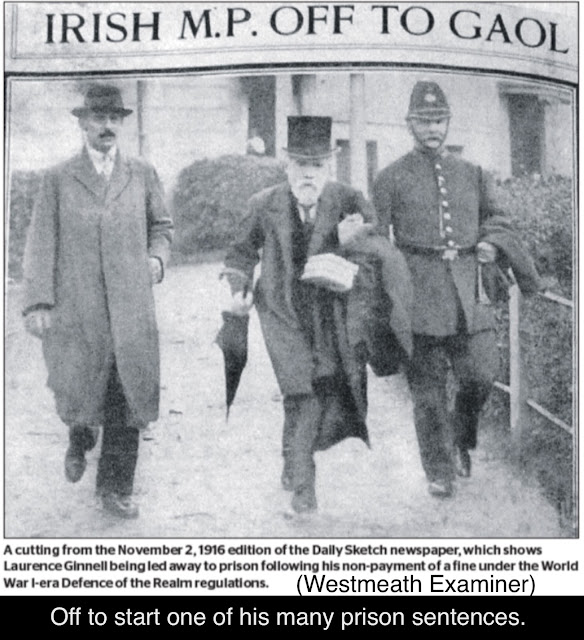 Ginnell was to the House of Commons for much of the first two decades of the 20th century, what Dennis Skinner was to that same parliament, many decades later. Both refused to be silenced and proceeded from one suspension to the next. Larry had the extra distinction of being expelled from both the Commons and the Dáil. His Dáil expulsion was for asking awkward questions, when he was the only anti-treaty TD to attend the third Dáil in 1922. He was ejected before it could get underway for asking awkward questions before signing in. 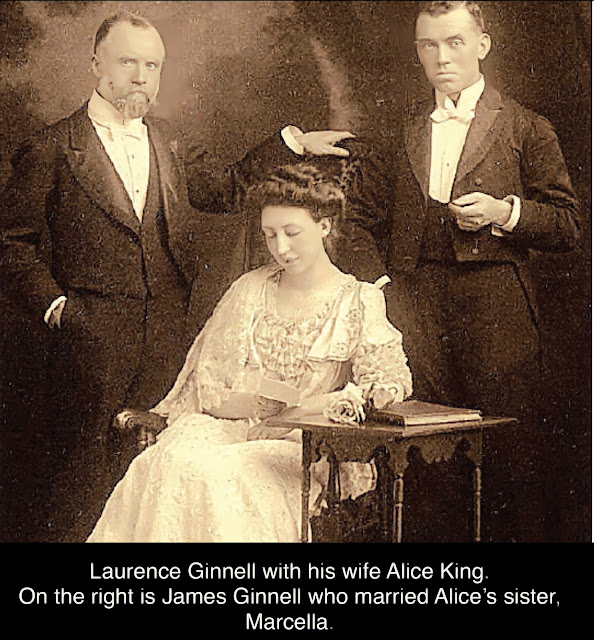 Laurence Ginnell was a founding member of the London branch of the Irish Literary Society. This branch  was very supportive of the Irish Literary society in Ireland and in particular, the newly formed Abbey Theatre.  A self educated man and son of a farm labourer, Laurence could speak several languages and was a highly skilled barrister and author of several books.

After his release from Mountjoy prison in September 1919, Laurence and his equally gifted second wife, Alice King from near Mullingar, arrived on Árainn in October for a holiday. Booking into Ganly’s famous hotel, by all accounts they had a great time. 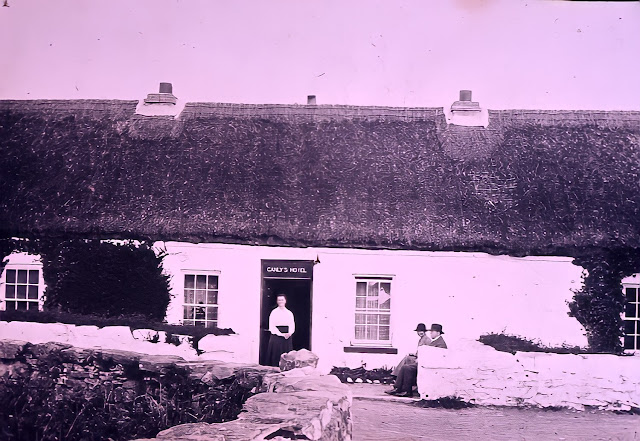 On November 1st, the Galway Express newspaper carried a report on Ginnell’s account of his visit as well as his views on other matters. The interview was done at the Railway Hotel in Galway and the journalist involved was accompanied by the solicitor George Nicholls who was head of the IRB in Galway. George was a brother to the tragic Eibhlín Nicholls whom we mentioned previously as being a friend to the Islands nurse, Bridget Hedderman 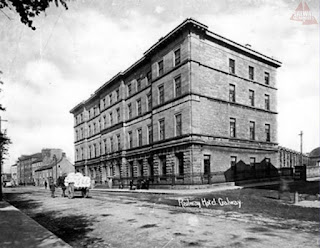 According to the newspaper article, the Ginnell’s entry in the Ganly Hotel visitors book will be read with interest as long as the Hotel stands and the record remains. Here is what it said.

‘Many more persons read of the antiquities of the Aran Islands than take the bother to visit them. The main attraction for visitors at present is to attain the Gaelic blas for which purpose Inish-meadhon is said to be the best of the islands. The antiquities and blas have valid claim on the attention of  all Irish people.

But Aran has a stronger claim as a great natural sanitorium unadvertised and unbooned upon the overworked, the exhausted, the run down, upon all those whose health is impaired.

In this condition I came and for the result, I shall ever feel grateful. It is much to be regretted that members of the medical profession do not frequent and experiment in Aran and diffuse its merits and the consequent blessing of good health, instead  of advising patients to waste time and money on so called foreign so-called health resort.

Inishmore is the best for this purpose, affording the greatest scope and variety. So mild is the climate that there is rarely any frost or snow. Cows and calves are outdoor night and day, all year round. And even persons physically delicate can safely bathe in the open area in October. What must it be like in bounding Spring and glorious Summer.

Rocks rocks certainly, is it any wonder that one loves Aran more every day, comes away from it with regret and longs for the opportunity of returning, when, while inhaling renewed health, he or she can examine and speculate upon the huge and mysterious Cyclopes forts of more than three thousand years old. The best preserved remains of that period extant in Europe or the numerous Christian temples, oratories, altars, graves, and holy wells of a later and milder date.

And hear the same kindly greeting in the  same language and soothing voice as when the saints walked the isles. All not merely gratis but with modest pride and gratitude to one for asking guidance.

While on Aran I have not heard an angry, not even a loud voice. When a health resort happens to be at the same time a place of scenic beauty and unique historical and religious interest.

I must be understood as quite within the literal truth regarding Aran with combined love and reverence. Visitors have nothing to fear in the matter of accommodation and pure and wholesome food.

Those whose health condition requires first class cooking, exquisite soups and meats, fish and fowl, prepared in the most tempting manner, dainty homemade cakes in endless variety and best quality and attendance equal to the best hotel anywhere, will act wisely in securing quarters in Ganly’s Hotel, Kilronan, Co Galway

Laurence Ginnell was a founding member of the United Irish League in 1898 which was a radical group who were willing to push for much more effective land distribution that the mainstream Home Rulers. It’s likely that Ginnell spent time with the Parish Priest, Murty Farragher, as Ganly’s and the presbytery were closely located.

Fr Farragher was the leader of the UIL on the island, founding a branch in 1904. He had been accused by some of using it to advance his own cause after his house was bombed in 1908 and maintain a boycott he instigated afterwards. He organised a welcome rally for Laurence in the local church grounds. 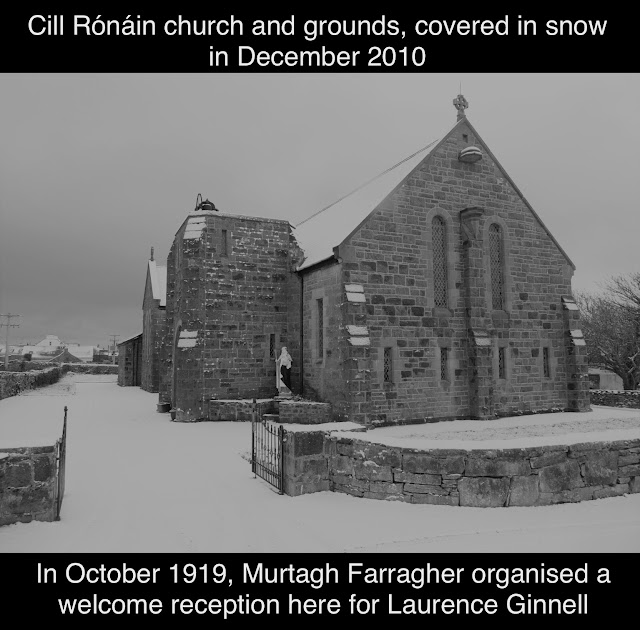 They may have had many things in common in 1919 but after the treaty, they ended up on different sides with Ginnell being fervently Anti-Treaty. He had been in Argentina during the Treaty debates promoting the Irish cause and was annoyed when he was prevented from registering his vote against the treaty, by cable.

In the case of most politicians, it’s likely that mention of the bomb and boycott would be scrupulously avoided but going on Larry Ginnell’s record for very blunt talking in both the Dáil and the Commons, it’s highly likely that he dived right in with his friend, Murtagh Farragher. 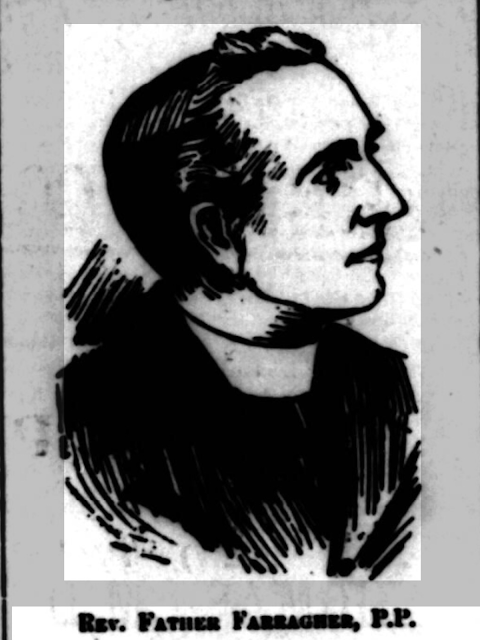 In the course of his 1919 interview he praised both the island and its Parish Priest, whom he rightly credited with being behind many improvements. He avoided going to see the ‘Blow Hole’ which he had been told was a ‘must see’. He noted that after his experiences in parliament and court he was very well acquainted with ‘blow holes’

Alice was a very gifted woman and spoke a number of languages. She had married Laurence when she was just nineteen and he was fifty and by all accounts they had a very happy marriage. A committed Suffragette and Republican, she probably was a positive influence on Laurence when he was one of only two members of the old Irish Party who supported votes for women from the outset. Some voted in favour later but both the Unionist Edward Carson and Nationalist John Redmond, were firmly against. 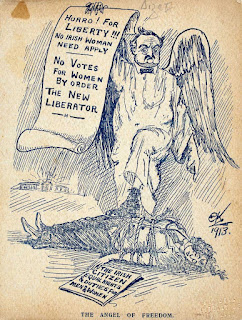 ( Note. Redmond’s brother Willie was a strong supporter of women being given the vote. Willie was involved in getting the falsely imprisoned Islander, Bryan Kilmartin released in 1884. He was killed during WW1)

.Alice was very supportive of Laurence and at his sentencing for incitement on March 26th 1918 to six months imprisonment, caused a disturbance in court by waving a flag and shouting “Up the Republic”. She was supported in this by her friend Maude Gonne McBride.

An R.I.C. Inspector recognised Alice Ginnell and ordered an unfortunate Constable to remove the two protesters, who were determined not to go. As he attempted to lay hands on the two women, fourteen year old Seán McBride, son to Maude, waded in and swung a few punches, both left and right, at the policeman and some detectives who came to assist, before all three were ejected. 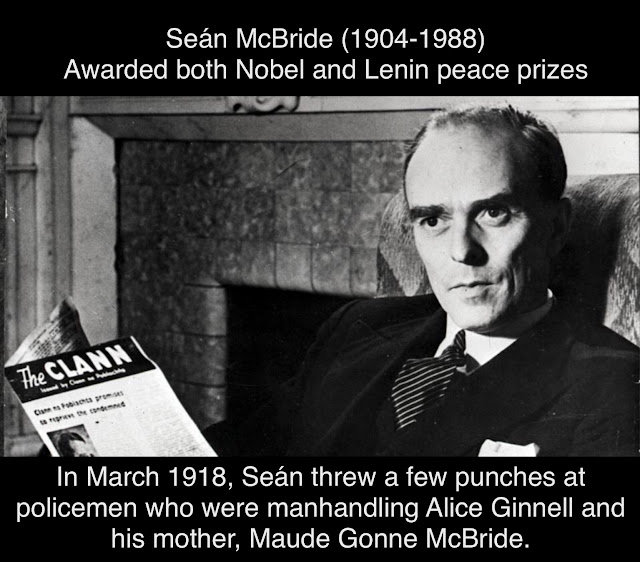 In December 1918, Alice recognised that the Westmeath election campaign for her imprisoned Laurence was being poorly organised. Taking on the role of official election agent herself, she became the first woman in Britain or Ireland to hold such a position. Her efforts helped greatly in getting her husband elected from his cell in Reading Goal. 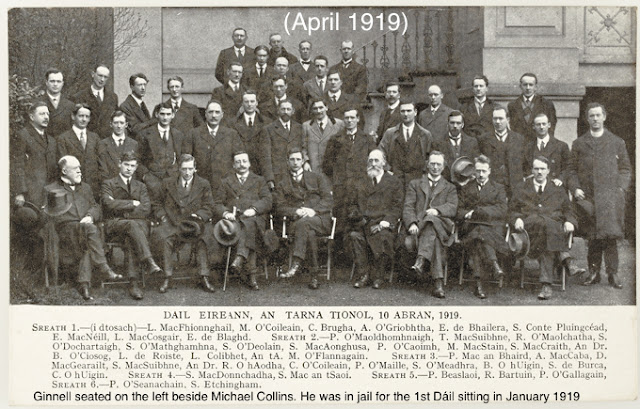 In recent years the important role the Ginnells played in Irish History has been acknowledged, with in particular, Paul Hughes at the Westmeath Examiner newspaper, highlighting the Ginnells contribution on a number of occasions.

Laurence was in Washington rallying support for DeValera in April 1923 when he died suddenly at age 71. His widow Alice would live on to the great age of 87, dying in 1967. It’s hard not to wonder what a suffragette, feminist and Republican like Alice made of the new Irish state that she and Laurence had fought so selflessly for. 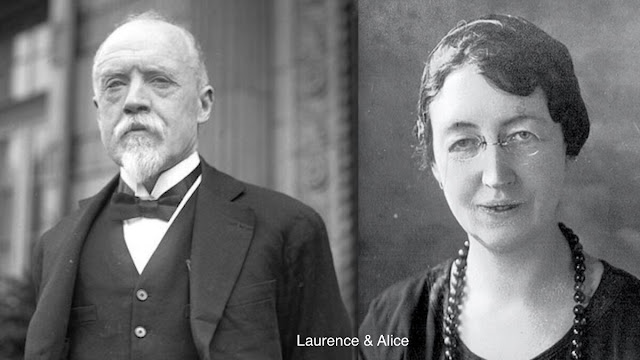 Thomas Ganly died in 1926 and his widow, Ellen O’Flaherty Ganly, sold the hotel in 1956 and moved to live with her daughter, Anna Blacker, in Kildare. Some of our readers will remember this magnificent thatched hotel, renamed Lios Aengus, when it was run by the Concannon family until the mid 1960s. Today it’s the location for one of the islands finest guesthouses, Dormer House. 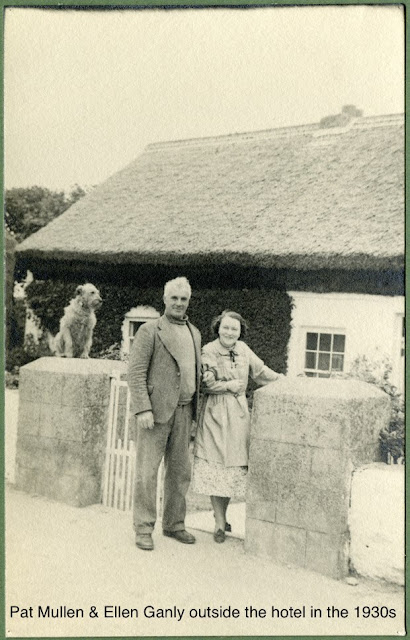 Alas, Ganly’s hotel no longer stands but perhaps the visitors book from 1919 is still around somewhere. In any case, we can thank the Galway Express of 1919 for letting us know just how highly the Ginnells regarded the hospitality and health benefits of the Aran Islands.

Our article focuses on the views on the island Laurence and Alice gave to the Galway Express on their way back from Aran in late October 1919. However, Alice would later recall that about a week after returning to the mainland, doctors ordered Laurence back to Aran where it appears they remained for a few months before going to Dublin in early March, 1920.

Alice must have journeyed to the mainland on occasion because she stood unsuccessfully for Sinn Féin in the local elections for the Pembroke ward in January 1920 where one of the successful Unionist candidates was Samuel Beckett’s father, William. As there was a three way tie for the position of chairman, Alice, who was in attendance at the first council meeting, was asked to draw the winner from a hat. She duly drew out William Beckett.

Laurence had probably exaggerated how well he had recovered in Aran in his November 1919 interview because, after his arrest in Dublin on March 26th 1920, he was released three days later as his health was so poor.

The two doctors who vouched for his very poor health, and called for  his release from prison were Kathleen Lynn and George Sigerson. A sitting member of the 1st Dáil dying in prison, was to be avoided at all costs, it seems.