The swimming feat of a Galway dog in August 1859

In September 1859, newspapers around the world carried a report from The Galway Vindicator, of how Owen Begley’s dog managed to swim twenty miles, to get home.

SWIMMING FEAT OF A DOG,- Among the excursionists to Arran last Thursday, was a dog, the property of Mr Owen Begley, of Prospect Hill. On the return of the Vesper, the poor animal- either through the unfeeling act of some person, or by accident - was precipitated overboard at twenty miles from land. Mr Begley thought the dog was lost, when, to his surprise, next evening, the noble creature reached his masters house, having made a swim of twenty miles in some hours. (Galway Vindicator )

While this is undoubtedly a great story, those familiar with Galway Bay will have some doubts as to its accuracy.
We can take it from the report that if the journalist from the Vindicator had been unfortunate enough to either fall or be thrown overboard at Ceann Bóirne (Black Head), he would have started swimming the twenty miles to Galway, hoping to climb ashore around Nimmo’s pier.

We did a piece some years ago about the bravery and intelligence of a lighthouse keepers dog “Rover” on Oileáin na Tuí (Straw Island) who aided in the rescue of some fishermen from a Welsh Steam Trawler, in 1911. “Rover” had plunged into the surf and dragged an unconscious fisherman ashore.

We have no reason to doubt that the dogs of Galway town were any less brave or intelligent and on finding itself in the water near Black Head, it looked to the shores, a few miles away on either side, at the foot of the Burren or at South Connemara before making up its mind, which way to swim.

Of course another likely possibility is that the dog was picked up by one of the many little sailing boats that worked the bay in those days. Still, the twenty mile swim would get most attention.

This little story led us to research the 148 ft Paddle Steamer Vesper which worked the bay in those days. This in turn brought us to the story of the Galway Trans Atlantic Line which flourished for a while in the late 1850s before eventually going out of business.

For more details on this ill fated venture and the involvement of the great Fr Peter Daly and the lines owner, Mr John Orwell Lever, readers can find a well researched and easy to read account by the Galway historian Timothy Collins in two essays he contributed to the Galway Archaelogical and Historical Society  The Galway Line in Context: A Contribution to Galway Maritime History (Part I) Author(s): Timothy Collins
Source: Journal of the Galway Archaeological and Historical Society, Vol. 46 (1994),

This society is a mine of information and details can be found online at this link.Here

The Paddle Steamer that brought the visitors to Arran that Sunday in August 1859 was P.S. Vesper which had been built in the James Henderson yard in Renfrew, Scotland in 1848.

The popularity of Arran had been massively boosted in the summer of 1857 when about seventy members the Ethnological Section of the British Association, held a great meeting and banquet inside the walls of DúnAengus.

Led by Sir William Wilde, father of Oscar, this marked the start of a great interest and determination to highlight and preserve, not only the archeology of the Aran Islands, but of all Ireland.

An indication of just how successful the banquet was, is that it finished with the French ambassador dancing a jig. Testimony to the enjoyment of the guests and the quality and volume of the wine on offer.
We hope to cover that banquet at a later date.

The Paddle Steamer Vesper had been brought to Galway to assist in ferrying passengers and luggage to the ships that, for a few years, operated from Galway to North America. The occasional trip to Arran was a summer addition and this boat also operated on occasion to the south shore ports of Ballyvaughan, New Quay and Kinvara. 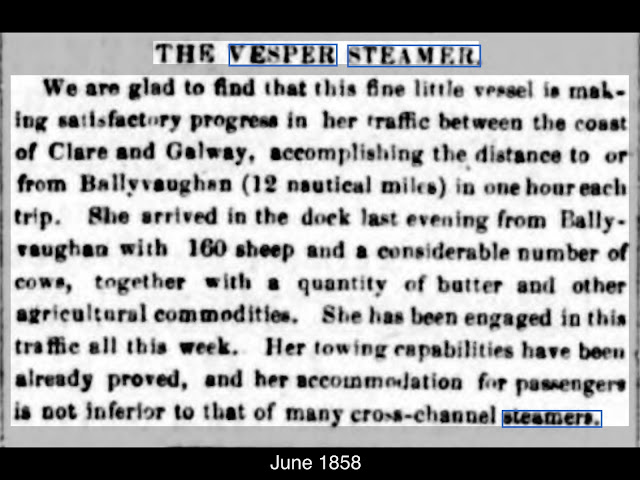 We are unsure if the paddle steamer pictured below was the “Vesper” in question but the low rails may explain how a poor dog might easily end up in the water.
The possibility that some drunken latchico did indeed throw the poor dog overboard is strengthened by a report in the local paper about the very same trip to Arran. No mention of the dog though.


THE TRIP TO ARRAN

The “Vesper” left the quay on Thursday on an excursion trip and having called at Salthill, steamed out of the bay with more than 200 excursionists. Refreshments were provided on board and all “ went merry as a marriage bell”
Set after set stood up, and the pleasures of the dance were not discontinued, till the vessel reached Arran when the fun was renewed with increased vigour. After spending four agreeable hours in Arran, the lighthearted party returned to the Vesper, and after a pleasant run, they were again in the prosy soberness of Galway life.(Galway Vindicator)


At one stage there was a suggestion that the Vester be put to work on the river Corrib as this was not long after the magnificent Eglinton canal was opened, linking the lake with Galway bay. Not sure if this ever came to pass.

The vesper moved on from Galway in 1860 and on her way south stopped off in Cork, Ireland’s greatest natural harbour, and made a few pounds doing some ferry work on the river Lee.

We came across a number of incidents involving the Vesper and her short time in Galway was quite eventful. One evening in September 1858, coming back from servicing the liner “Pacific”, she was in collision with a hooker which quickly sank. Nobody was lost it seems and Mr Lever offered the fisherman £10 to get a new boat.

Some time previously, in March 1859, word came through to Galway that a deserted ship had been seen drifting past Árainn and through the North Sound, into Galway Bay. The Vesper had a head of steam up and immediately headed off to try and salvage the ship and cargo. They were too late as already a Claddagh fishing boat had spotted her and with the help of another boat was towing her to Galway. These boats, the Falcon and the Siren were said to be owned by Peter Sweeney.

Being a steamer, the Vesper was much better suited to towing the crippled ship but her offer of help was refused for obvious reasons.
It seems the Vesper crew may have been too forward in their offer of "help", as the Claddagh men armed themselves with hatchets in order to reinforce their refusal of assistance. The ghost ship was eventually beached near Mutton island and the cargo of timber, salvaged.


A postscript to the deserted ship is that she was believed to be the brig Triumph of Limerick. This ship had been making a passage from St Johns with a cargo of timber when she foundered in mid Atlantic. Sadly, a report reached Galway a few days later of the bodies of six men being washed up on the Aran Islands and many thought these men must have been from the deserted ship. The number was later reported as three.

Just how many were lost at sea in those times is impossible to know but it seems the crew of the Triumph had been rescued some weeks earlier, on Christmas day 1858, in an exhausted state, by the American ship Cordelia.

The crew were near to death and had spent more than a week in the rigging as their boat became waterlogged. Who the dead men washed up on the Aran islands were, God only knows.

So a heartwarming story of a brave dog can lead one down so many other avenues and we had better stop now before we wander any further.  We did come across however, the fact that Owen was in his early twenties at the time and although he would later be charged with having a wandering dog in Bohermore, the charge was dismissed.

And then there was the story of a disgruntled passenger writing a letter of complaint to the newspapers about the arrogant behaviour of the captain of the Vesper, on an excursion to Arran. The captain had been pushed into service to cover for the regular master. The following week a letter appeared refuting the allegations and signed by a vast amount of the great and good, who had been aboard that day. Better not go into that as we have been advised that some of our articles are a bit on the long side.

In what is known in Ireland as a "backhanded compliment" our reader said they enjoyed the article but it was a bit too long.